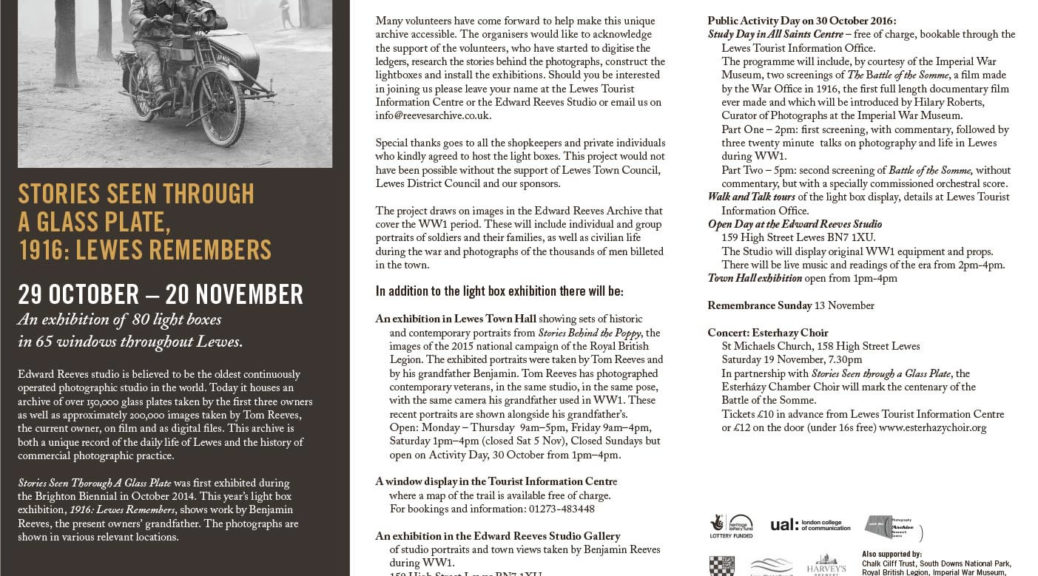 An exhibition of 80 light boxes in 65 windows throughout Lewes, 1916: Lewes Remembers will show work from the years of the First World War by Benjamin Reeves, grandfather of the present Reeves owner Tom Reeves.

This will include individual and group portraits of soldiers and their families, as well as civilian life during the war, and photographs of the thousands of men billeted in the town.  To help bring things to life, the photographs will be shown around Lewes in locations relevant to their subjects.
The Lewes Tourist Information Office will supply a free map of the light box trail.
In addition to the lightbox exhibition, there will be:
An exhibition in Lewes Town Hall bringing together photos of men from WWI and contemporary veterans, taken by Benjamin Reeves and Tom Reeves;
An exhibition in the Edward Reeves Studio gallery of studio portraits and town views taken by Benjamin Reeves during WWI;
Study Day in the All Saints Centre on Sunday 30 October 2016, featuring the 1916 War Office film The Battle of the Somme;
Also on Sunday 30 October 2016: Walk & Talk Tours of the light box display; Edward Reeves Studio Open Day featuring WWI exhibits, music, and readings 2-4pm; Town Hall Exhibition 1-4pm;
Remembrance Sunday event at the Lewes War Memorial, 13 November 2016;
Esterhazy Chamber Choir concert, Saturday 19 November 2016 – on the day after the Battle of the Somme ended 100 years ago the choir performs Songs of Farewell at St Michael’s Church, Lewes, 7:30pm.
See more about the Reeves archive here